Bike route through Granada of the 3 STARS educational centers 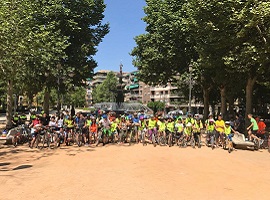 On May 29, the inter-center bicycle meeting of Juan XXIII Chana, San Isidoro and Andrés Segovia was held, framed in the STARS project.

As a practical activity, in which, once they have received training throughout the course, the 3 educational centers that demand to go to their schools autonomously, with their classmates and actively, have launched themselves with their teachers and professionals from the Municipal Road Safety Center to make a journey from La Chana to the Fuente de las Batallas, claiming Safety and space for this mode of travel that intends to stay in Granada as it has done in the rest of Europe.

The tour has started from C.E. Juan XXIII Chana, along Avenida de las Alpujarras they have reached the bike path next to the A44, which they have traveled to Professor Luis Molina Gómez street, where they have joined the San Isidoro school, back to the bike path parallel to the ring road, They have reached Eudoxia Piriz, continuing on the road along Avenida de la Ciencia, Avenida Fernando de los Ríos, Paseo del Violón, turning to Gonzalo Jiménez de Quesada and Avenida del Duque San Pedro de Galatino, where they have joined the Andrés school Segovia. They continue to Primavera street, Fontiveros square, where they use the bike path again, and to Poeta Manuel de Góngora, circulating along the bus-bike path, to Puente Blanco, Acera del Darro and ending the route at Paseo del Salón.

Almost a hundred cyclists joined in the request for the bike lane on Arabial Street, with the message that in Arabial with Bike Lane there will be more Safety, recalling the accident of the cycling partner a few weeks ago, when opening the door a parked vehicle when he was circulating correctly.

Thanking the staff of the educational centers and the cycling unit of the Granada Local Police for being able to carry out this cycling and educational activity.

Center for the Complete Management of Mobility

Delegation of Citizens Safety and Mobility.
City of Granada